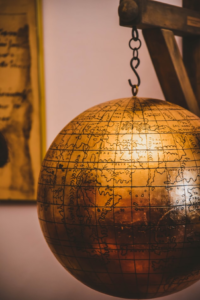 we shall have to think up signs,

sketch a landscape, fabricate a plan

on the double page

of day and paper.

tomorrow, we shall have to invent,

the reality of this world.

My title for this Reflections Q&A is a gloss on the book by Katherine McKittrick,  Demonic Grounds: Black Women and the Cartographies of Struggle.  Her definition of geography is quite valuable for understanding Toni Morrison’s geographical project; namely, that “geography actually comprises a layering of orientations to place—physical, metaphorical, theoretical and experiential” (Mckittrick).    And “place” can refer to a continent, a cane field, or even the cutting marks on one’s back.

McKittrick explores how “Geography’s . . . well-known history in the Americas of white masculine European mappings, explorations, and conquests” has helped to establish a dominant point of view of space, place, and location that renders African Americans’ lives as “ungeographic.”  Toni Morrison’s fiction can go far in reversing that for readers who are willing to enter her imaginative worlds: the dramas unfolding in historical times and places and along migration routes that are centered on black life, with very few white folks in sight anywhere.

And these literary worlds, or “chronotopes,” as I will develop this term for discussing Morrison’s works, re-invision American space and time by inflecting historical “facts” with the enchantment of otherworldly places and people, and by sequencing narrative parts in order to emphasize fluidity in time and place. 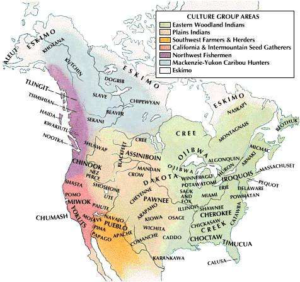 Actually, many of our maps of the same space or place are distinctly different, even conflicting, before we even open a book by Toni Morrison.  For those of you who are familiar with the ways in which the history of Native Americans or American Indians has been taught in U.S. public schools as well as mythologized in commercial films, you already have conflicting mappings in your minds.

Indigenous peoples of North America were comprised of very diverse cultural groups numbering in the thousands, spread out broadly across the continent.  But the U. S. maps that used to hang in classrooms when I was in school showed little of this.  In fact, my early “mental mapping” of native people was oriented chronologically, a sort of fading out from east to west across North America until the end of the 19th century, when the survivors were circumscribed into “reservations,” or deposited in cities.  Sad stereotypes of Native American geographies.

The erasure of native peoples on the North American continent has no equivalent, period.

However, African Americans also have experienced geographic erasures and circumscriptions, and it is one of the visionary aspects of the Beloved, Jazz and Paradise trilogy along with A Mercy to create black presence in a world of unfreedom, setting in motion one of this continent’s most important stories about itself: the African American Diaspora.

Edouard Glissant, Martinique poet and critic, offers a compelling term for this type of practice:

“Creolization . . . helps us to emphasize that . . .we can escape from the jail of History (with a capital ‘H’) and put together our histories (without the capital); that we can imagine diffracted times coming together, without this imperial linear conception of time that Columbus brought with him” (274).

This aptly complements McKittrick’s notion of the “demonic,” which is most readily associated with  religious beliefs.  However, it has also been employed in science, according to Katherine McKittrick, and the latter is what she is going after in her book’s title:  “a working system that cannot have a determined, or knowable, outcome. . . . A non-deterministic schema . . . [that] cannot predict the future.”   Toni Morrison’s chronotopes in the Beloved, Jazz, Paradise project present readers with  such non-deterministic American history: demonic grounds.

What if the North American continent could talk?  What poetic phrase would it conjure for African American presence here?

Next up, if you wish to continue with Geographic blogs:  Black Mappings.

And do sign up, if you haven’t yet, for the Newsletter at the bottom of the page!