We call on the gods who know well the storms

And if we manage to come through somehow

To safety, from a small seed there just might spring 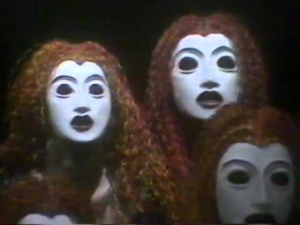 “Trilogy,” you most likely know already, is derived from Greek words meaning three (tri) stories (logy), and it originally referred to a group of 3 tragedies by one author for the annual competition at the Dionysian Drama Festival in Athens, 5th century B.C.E.

Significantly, Toni Morrison’s “Beloved trilogy,” as she herself called it (The Paris Review, 1993), is not exactly like those of the Greek playwrights.  There is no obvious continuation of a story from Beloved through Jazz and to Paradise, as in the classic trilogy by Aeschylus, The Oresteia, comprised of three dramas (Agamemnon, Libation-Bearers, The Eumenides)  about one family’s entanglements in love, loyalty, revenge, murder and ultimately justice.

In this blogpiece, I hope to explore with you the following:

1.  How can some classic aspects of a “trilogy”—style, subject matter, organization— help us to understand how three novels published independently of one another and with no overlap in characters should still be explored as a trilogy?

2.   How did Morrison conceive of her “trilogy” at first, and why did she think she had failed?

3. How did Morrison’s “love” project evolve over the years from the writing of Beloved to the completion of Paradise?

Not exactly a Trilogy, but a Trilogy 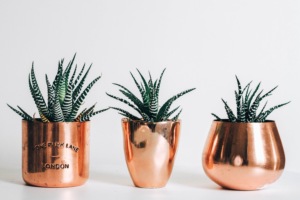 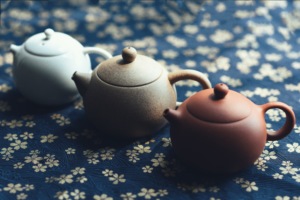 So I resisted for years to apply the word “trilogy” to Morrison’s work, preferring “three-novel project” instead. I wished to emphasize that Beloved, Jazz, and Paradise were more open-ended and innovative than that old term “trilogy” could capture.

I was right about that in some ways, but also wrong to resist the riches to be uncovered by examining Morrison’s works within a classical framework; particularly with that of the play-cycle the Oresteia,  made up of Aeschylus’  The Agamemmnon, The Libation-Bearers, and The Eumenides, the trilogy that won the prize at the Festival of Dionysus in Athens, Greece,  in 458 B.C.

Morrison herself performed classical drama at Howard University in the 1950’s, traveling across the country with the Howard Players, and her minor was in Classics as well.  Let me be clear, though:  I am not suggesting that Morrison tried to copy a Greek dramatist; only that that Aeschylus’s work was a part of her broad background in the humanities.

And, like any jazz musician worth her salt, Toni Morrison reworks different “standards,” building upon but taking into new directions the work of other artists across the cultural spectrum (A jazz musician?  Curiouser and curiouser . . . head over now if you like to View at the Bottom of the Band for more on that).

I explore some striking instances of intertextual connections Morrison and Aeschylus trilogies in Intertextuality: a Call-Response Modality in Morrison and Talking Back to Aeschylus, but for this blog I want to note a broad stroke in common between them: that in both, there is “a “dilation or thickening of the tragic moment and enormous buildup of tension around it” (Otis Brooks, Cosmos and Tragedy, An Essay on the Meaning of Aeschylus).

There is as well an emphasis on characters that are larger than life and tragic figures of great passion, for as Toni Morrison has said in defense against critics who find her characters unrealistic, “life is that large.”  And while Morrison’s characters are distinct in each novel, there are some fascinating resemblances.

How do you respond to characters who seem larger-than-life, mythical, unreal?  Is your sense of them the same, or different, than your sense of more realistic, down-to-earth characters?  In what reflective directions are you taken by a figure like Gandalf from Tolkien’s Lord of the Rings or Katniss from Collins’ The Hunger Games? Can you identify any of Toni Morrison’s characters—in any of her novels—who strike you as larger-than-life? Go the end of this post for the reply-box.

The Inception of One Story That Became Three 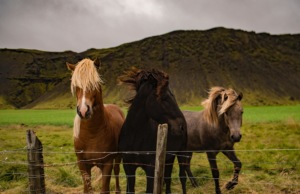 Trilogies are not always planned that way.  Sometimes, as with J.R.R. Tolkien’s Lord of the Rings trilogy, it’s an after-the-fact restructuring of materials: Tolkien’s editor wanted to save paper!

Or, a writer might start writing one work, but can’t finish the project she set out to do, and so it becomes 3.  When Toni Morrison had completed the manuscript which eventually became Beloved, she thought she had “hit a writing impasse,” according to her interview with Gail Caldwell.  The year was 1985, and she had resigned her editing position at Random House to write full-time:

“I had decided that I was never going to meet the deadline, and I would just have to live with it.  But I gave Bob [Gottlieb] what I had, and said, ‘I’m sorry, because I really and truly have only a third of a book.’ And he read it and said, ‘Whatever else you’re doing, do it, but this is a book.’ I said, ‘Are you sure?’”

Except for the last two pages of Beloved (the epilogue), the novel was finished.  The set of ideas out of which Morrison had developed the manuscript, however, had just begun a protracted, many-sided career which was to last more than a decade.

One link between Beloved (1988) and Jazz (1992) was clear early in her project: between two documents she had seen an an editor at Random House.  Well-known to Morrison fans is a newspaper article which she perused while working on The Black Book concerning Margaret Garner who in 1856 in Cincinnati, Ohio had succeeded in killing one of the her four children rather than see them go back into slavery. The moment of Garner’s decision, that she would “‘not let those children live as [she] had lived,’” was “a piece, a tail of something” that “didn’t get clear” for Morrison until she linked it with another piece.

This other piece was an image from photographer James Van der Zee’s The Harlem Book of the Dead of a young woman in her coffin, whom Van der Zee described as letting herself bleed to death rather than expose her lover who had just shot her. 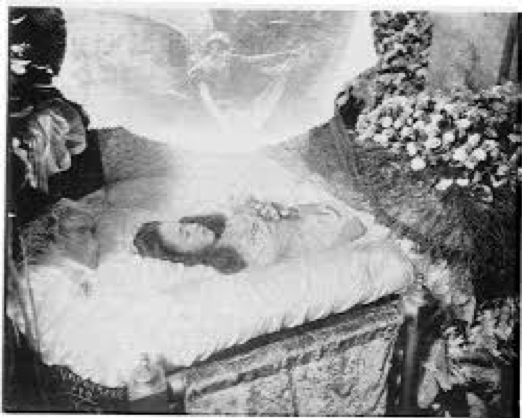 This 1920’s story resonated with the 1850’s Garner narrative for Morrison, for in both cases, “something seemed clear . . . A woman loved something other than herself so much” (Naylor interview).

Initially, then, in several interviews from the mid-1980’s,”love” was Morrison’s articulated idea for Beloved and “the next book, as well as the one after.” (Interview with Taylor-Guthrie).  But this concept of a woman loving something or someone else more than loving herself evolved into a wider set of concerns, so that love becomes a deep and winding chasm running through the oceanic scope of the Beloved trilogy.

What do you imagine, what images or memories come to mind, when you consider the statement “a woman loved something other than herself so much”?  Respond in the post-box below!

Claiming Geographic Space in the Americas

Morrison’s trilogy evolved in several important directions that parallel the love theme.  For example, when I read Paradise for the first time, the hair on the back of my neck prickled. 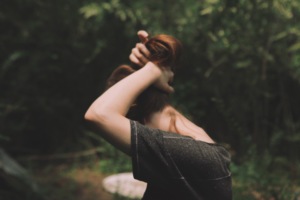 Photo by Jacob Morrison on Unsplash

This visceral reaction was produced by a revelation about mapping space and place in Oklahoma, U.S.A., a place where I grew up but of whose history I apparently knew little.  Morrison’s project reclaims American geographic mappings of race and place in Oklahoma, where there were once 31 all-Black towns but I had only heard of one (Langston) the entire 30 years that I lived there.  In fact, the Beloved  trilogy presents us readers with a penetrating, potentially nation-changing, geography.  By reconfiguring dominant concepts of American space and place through historically-charged emotional story structures evoking the African American diaspora, Beloved, Jazz, and Paradise provide something unique in Morrison’s canon of novels:  the designation of a “long, high gaze,” in Carolyn Denard’s words, of the crucibles of African American experience. Denard was describing similar themes of place and history in William Faulkner and Toni Morrison, but it is an apt phrase for understanding Morrison’s trilogy. 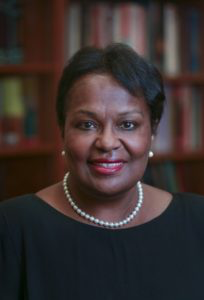 Each of the three novels consolidates major historical landmarks in African American experience and the difficult choices people have had to make to live through them:  American slavery and the struggle to claim oneself in its immediate aftermath in Beloved; urban migration and the formation of (counter) modernity in Jazz; and western migration with its contrary aims of citizenship and utopian separatism in Paradise.  But as important as the historical experience is the geographic, place-based experience. Go to my section on Claiming Geographic Space, 4 blogs to beckon you to think with me about how Morrison rewrites the dominant American map and involves readers in the the multiple chronotopes—literally, timespaces—of the novels.  (we begin with considering the body as geographic space.  See the Baby Suggs’ Hands blogpiece.

Repetitions Across the Three Novels

There are what I and others have recognized as “crossover” characters between the novels.  Not only does the “woman black as firewood” in Paradise (318) have her antecedents in the girl Beloved (Beloved) and the young woman,Wild (Jazz), but Sethe and Paul D (Beloved) seem reconfigured into Joe and Violet (Jazz) and Connie and Deek (Paradise).  The actions of characters seem to reverberate from one novel to the next as well, just as in Aeschylus’ trilogy.  That paralleling (Morrison & Aeschylus) will be explored in the Talking Back to Aeschylus blog in the Intertextual Connections Section.

However, the most amazing patterns across the three novels are more akin to musical changes and rhythms, so much so that the Beloved trilogy can be called “intermedial,” a literary work that incorporates characteristics from another medium.  Verbal art cannot be polyphonic in the same way that music can, where listeners might recognize two or more simultaneous melodies being played at once.  But it might suggest polyphony. Ditto for polyrhythm, propulsiveness, and even improvisation.  And pictorial description cannot be rendered except through language, but that language can suggest pictorial narrativity, what Morrison has called a “galaxy of feelings and emotions” (Morrison, “Memory, Creation, Writing”).

“Intermediality” in Morrison’s novels is one reason why they are so challenging to read, but exploring these possibilities will, I hope, yield greater insights and experiences for readers. Go to Black Musicality in Beloved, Jazz and Paradise, the first blog to launch the series.

Returning to the question of how Morrison’s love project evolved, I would be interested to know  what you think of this offered speculation; namely, that the trilogy grew not away from the themes of love but deeper through them—with space, place, time, rhythm, sound–to provide for her readers the experience of race without the lethal cling of racism.  For this is my belief: that the Beloved trilogy clarifies our very notions of justice, empathy, and beauty.  Comments? 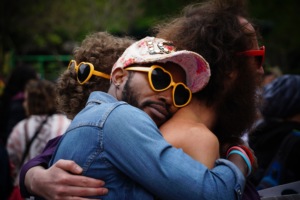