“The neighbors seemed pleased when the babies smothered”(21). 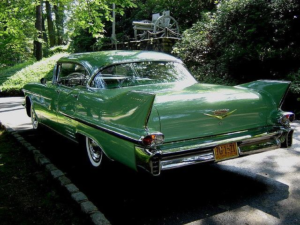 The opening of one section of Paradise begins with a striking example of a double-voiced, “signifying” discursive style.  On a hot day, Mavis had left her two babies in the car—for what she recalled as being just for a few minutes—while she went to the grocery store to get some wieners. This tragedy will set in motion her journey ultimately to the Oklahoma panhandle, but in her urban community back East, people were “annoyed” by the mint green Cadillac belonging to Mavis’ husband; it was parked prominently in front of the house most of the time, and it was what Mavis drove on the fateful day. So even though neighbors prepared meals and made a collection for the family, they were secretly delighted at the undercutting of what the Cadillac display presented: reckless pride.

What possessed Morrison to write this way?

This blog will concern the double-voiced style of Toni Morrison and how it can affect readers.  The opening line of the “Mavis” section of Paradise is also a great example of signifyin‘!

Looking Ahead to the Responses Invitations: you will be asked to reflect, write, and/or post on the lines:

“They shoot the white girl first.  With the rest they can take their time.”

Morrison’s adoption of the neighbors’ point-of-view with which to launch the episode is ironic in relation to the pathos of the babies’ deaths. And then there is the psychological toll on Mavis.  Readers have to speculate about why Morrison is doing this.  The double-voiced discursive style continues as Mavis is being interviewed by a reporter and photographer in her home after the funeral: as Mavis tells her story, the reporter’s “eyes went soft, but the shine was like that of the neighbors”(22). And even more displacements in point of view occur as we learn of Mavis’ fear of her two older children and her husband trying to hurt her, and gradually of her mental instability (only 4 of Mavis’ 11 hospitalizations were for childbirth; her mother cringes at Mavis’ belief that her family was going to kill her). 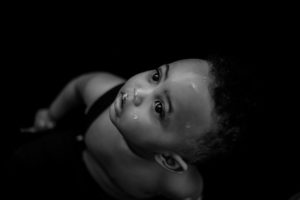 Actually, the quotation concerning the attitude of Mavis’ neighbors is a stark example of what Toni Morrison has developed as a specialized formula in her writing.  It is a language that “must be both indicator and mask” because it “has to permit criticism of both rebellion and tradition.” It is a “critical voice which upholds tradition” but also “provides occasion for an individual to transcend and/or defy group restrictions” (Morrison, “Memory, Creation, and Writing”).  Recall from the “Black Musicality” blog the propensities for indirection and circumlocution in black vernacular and musical performances?  To create language that suggests two (or more) things at once, two things that may even be in conflict, is prevalent in the speech tradition of “signifyin(g)” and the jazz musical tradition of “quoting,” to name two specific, related concepts.  “Indicator and mask” is also “speakerly” in Henry Louis Gates’ sense, where a play of voices in a Black literary text takes on “a dynamic character” (Gates, The Signifyn Monkey) and emulates oral speech to some extent. However, Morrison’s deliberate choice of terms needs further reflection.

“Mask” conjures up an enormous range of images and tones, and I believe a few words from a famous study of masks in European carnivalesque celebrations can also give us, the readers, a vivid sense of what is going on.   My citation of carnivalesque is from a modern Russian looking back at medieval Europe; whether his observations can be valid for an African-based vernacular tradition is uncertain, but I believe they can parallel the analyses of Smitherman and Gates.

In his work The Dialogic Imagination, Mikhail Bakhtin observes that masking is “the most complex theme of folk culture” in European carnivals in the middle ages:

The mask is connected with the joy of change and reincarnation, with gay relativity and with the merry negation of uniformity and similarity; it . . . .  is related to transition, metamorphoses, the violation of natural boundary, to mockery and familiar nicknames.  It contains the playful element of life (40).

So to “mask”—while also “indicating” that which is not masked—is to set in motion some playful equalizing of dualisms: tradition and the critique of tradition, the highbrow and the lowbrow, the serious and the comic, the conventional and that which defies convention.

See what you think: do Bakhtin’s remarks “dovetail” whith this next remark by Morrison on the Tar Baby folktale in the African American oral tradition? 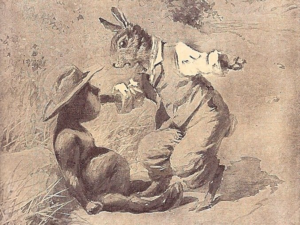 The Tar Baby tale seemed to me to be about masks. Not masks as covering what is to be hidden, but how masks come to life, take life over, exercise the tensions between itself and what it covers.  (Morrison’s  “Unspeakable Thoughts, Unspoken” essay in Conversations with Toni Morrison)

Lively personaes, then, who may be signifying two or more things at once. And Morrison’s narrators–seemingly omniscient, but not really–will show us how it’s done!

Those Opening Voices in Beloved & Paradise . . .

are evident in each of the three openings in the trilogy. They serve as “keying” devices for launching a performance, a special code that fans of the artist can recognize. We will consider two of them here:

We can identify the “indicator,” the most literal reading of the passage, as the description of a place full of spite, connecting somehow to an angry or vengeful baby.  Yet the enunciation is also in a particular tone of a particular observer, and reveals as much about the narrative viewpoint here as it does about the subject.  It is a remark by a voice which knows a story and can initiate that story in summary fashion.

Further, it makes a subjective assessment of the situation in 124 in a matter-of-fact tone (no embellished or figurative language, though possibly some unusual sounds in ‘spiteful’ and ‘venom’), but with stark  imagery, indicating a complex set of feelings about the subject at hand. The readers–whom Morrison’s text assumes are responsive, participatory –can read this as a possible “mask” which they can evaluate for themselves (although this may not coalesce in the reader’s interpretive response until he or she has read further on in the narrative so as to have a basis for comparisons). 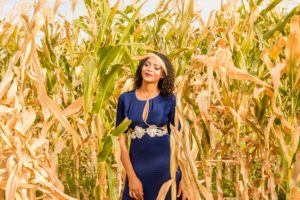 For my final illustration, I have to insert just one more concept: jazz’s “telling effect.”  This is the term coined by jazz musician and critic Albert Murray in his seminal, mid-20th century work, The Hero and the Blues. Murray describes jazz’s “telling effect” as that which “alleges, quests, requests . . . mocks, groans, concurs, signifies.” See if that doesn’t add some more flavor to the mix as you read the next passage:

They shoot the white girl first. With the rest they can take their time. No need to hurry out here.  They are seventeen miles from a town which has ninety miles between it and any other.  Hiding places will be plentiful in the Convent, but there is time and the day has just begun. —Paradise

How do we readers evaluate the subtle but important variations in the omniscient narrator’s voice in this opening of Paradise—its “telling effect”–as it tunes itself to one character’s view and then another’s?  The enunciations of “can take their time” and “no need to hurry” along with the observation of “plentiful” places to hide make up a cadence which establishes the disposition of a particular group of characters with the rhetoric of a leisurely event. Let’s call that the “mask” part.

Conversely, the “indicator” part is the narration of someone–“they”–shooting females in a cold-blooded murder-spree. The dramatic action happens quite quickly as the men sweep through the Convent where 5 women are living, causing the probable deaths of two and taking aim at the backs of other women running “like panicked does” (18).  And, by the way, who is that white girl? Or rather, to get aligned with Morrison’s love of language, who calls whom white, and why?

The telling of the slaughter in such a lax voice suggests that something is off-course, “tilted” here in Paradise. From that angle, speculate on the possible meanings and implications circulating around “They shoot the white girl first.”

(One last word on Bakhtin’s sense of masks is his observation that they “grant the right not to understand, the right to confuse . . . . And finally, the right to betray to the public a personal life, down to its most private and purest little secrets.”)

Well, are you ready to dig further into musicality?  Let’s go to the next in the cluster:  “There is Sound in my Books”: the Readers’ Aural Experiences.