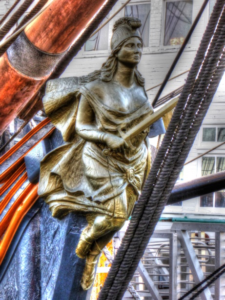 Late in Paradise, some of the Convent women who had been shot by the patriarchs from the all-black town of Ruby miraculously reappear.  Take Pallas Truelove, for example: carrying a sword along with her newborn, Pallas walks through a wall into her mother’s home. She picks up some huaraches there and then walks out through another wall, baby and sword in hand.  The allusive name of  “Pallas” will be discussed in another blogpiece (Talking Back To Aeschylus), but here let’s consider her as emblematic of many otherworldly figures in Beloved, Jazz, and Paradise.

Some of the timeless beings who move in and out of the historically and geographically-situated spaces in Toni Morrison’s trilogy are returned-from-the-dead figures: Beloved, of course, and Pallas, Gigi, and Mavis near the end of Paradise.  But some of these enchanted beings simply appear, as with the three walking men also from Paradise (Walking men ). But whatever their status, they function to guide, warn, enlighten, protect, correct, or chastise the living.

And when I’m actively reading and re-reading Morrison, I feel like I’m included among them.  For me, the otherworldly figures open a door or a window in my imagination that allows me to experience a more fluid sense of time and space.

This blog will explore the following question:

When you encounter otherworldly people, places, and/or events in a chronotope (a narrative timespace) that seems otherwise realistically believable, how do they open up the novel as a whole for you?

And what effects do these supernatural sequences have on the more down-to-earth people in the work?

In Black Women Novelists, Barbara Christian describes Morrison’s novel form as “fantastic earthly realism”(137).  Others have aligned her work with Gabriel Garcia Marquez (One Hundred Years of Solitude) and the narrative mode of “magic realism.”  In my blogpiece, The  Chronotopic Imagination of Toni Morrison, I also discuss “creolization.” Here, I want to consider some of these elements as “enchantments”: that is what Morrison called them once. 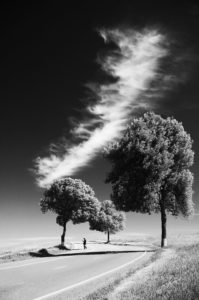 Photo by Alex on Unsplash

These are the supernatural elements in the trilogy: the ghost-girl in Beloved, the ephemeral walking men in all three novels (see Walking Men: the Chronotope of Rhythmic Enchantment), and the “something, a window, or door?” in Paradise that seems to open into another time-realm for Anna Flood and Richard Misner as they sort through the remains of the Convent after the violence.

Morrison’s chronotopes contain what I will call disembodied forms of consciousness—from “haints” in Beloved to shadowy ash people in Paradise to even the modernist “clicking sound” roaming the streets of the City in Jazz. They may be ancestors returning from the recent dead, shadowy mythic personages, or from the non-human realm of plants and animals. They may appear and disappear like seeds being scattered:  forms of consciousness which have gone undocumented, or which have been “disremembered.”

Can You Identify Some Otherworldly Chronotopes

. . . and what they mean to you?  (the “voices” outside 124 Bluestone Road in Beloved; the “clicking sound” in Jazz’ personified “City”; the “statuary ash people” occupying the burn-out house where Consolata had her trysts with Deacon Morgan in Paradise? 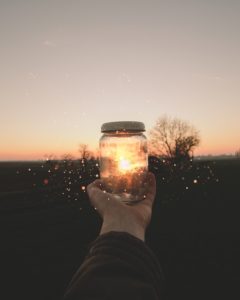 (Actually, there are non-human possibilities here; weather, animals, trees . . . A Mercy is actually Morrison’s most profound exploration of the non-human, enchanted presences that intermingle with her human ones, and I hope to blog on this in the future.)

Furthermore, there are significantly “empty” time-places that seem enchanted: the Clearing in Beloved, the empty cave in Jazz  In these and other ways, our historical “mappings”—to return to questions of geographic readings—are salted through and through with enchanted places, people, and pathways.

Morrison’s literary craft gives her readers new worlds to experience, reflect upon, and even remember.  What, to you, is the significance of those readerly encounters? Select one of the examples mentioned above, or introduce others.  –For example, what about the elusive figure of Wild and her enchanted, empty cave?

In the next blog, Some Genesis Time: the Epilogues framing Morrison’s Trilogy, I offer some close-reading of another type of enchanted chronotope that Morrison uses: the otherworldly timespaces of the epilogues.

Wish to sign up for the Newsletter?  Go to the bottom of the page.